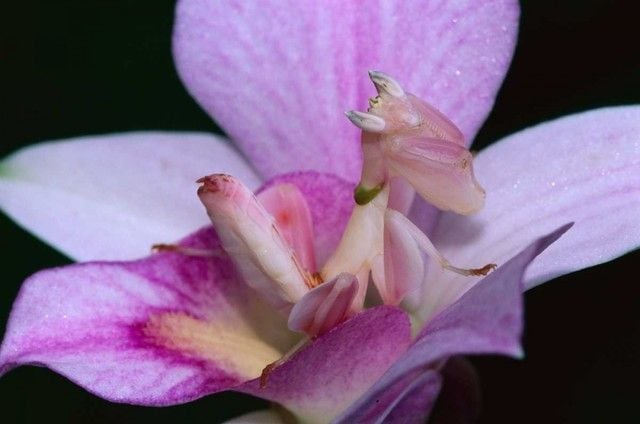 I am an orchid lover by nature.  I adore James Story, Phalaenopsis, Vanda,  Cypripedium and just about any other flower that resembles this delicate family of blooms-even if it happens to be a MANTIS.  Yes, Mother Nature is awfully clever when creating her creatures, especially when it comes to the species, “Pink Orchid Mantis” that lives in the warm climates of SouthEast Asia, Malaysia.  Some scientists call this predator of the wild a miracle specimen due to its unusual coloring that looks exactly like a real blooming orchid. What do you think?

Although quite beautiful to behold, don’t get the wrong idea about this little guy who is seen as a threat to many other organisms living inside the same habitat.  This Mantis (like so many others) is capable of attacking and killing insects as well as frogs, birds and lizards. Don’t judge him by his size because Mr. Mantis can take out enemies possessing small vertebrates just by using his legs and teeth.  Mrs. Mantis is said to be even more dangerous to her prey since she can double in size from her male counterpart. If you happen to be traveling to this side of the world and catch a glimpse of this critter, don’t be afraid you’ll be his next meal because the venom of most Mantis is harmless to humans although you might feel quite a pinch.  The bottom line is- this species means BUSINESS when it comes to their appetite and can also be quite domineering of their territory. There are even recorded instances of a mantis’ consuming family relatives who get too close for comfort when threatening their dinner.

But you have to admit… the Orchid Mantis is quite a beauty!  Often shaded in pink to blend in with the environment, this mantis is also known to change to tints of brown and green when nature calls for further blending into landscapes.  The flower look-alike can play one of the best games of “Hide-and-Seek” with both predators and prey that mistake the legs for petals and face for the center of the blossom. Don’t make the mistake that unknowing species might make because the bloom really are teeth that are waiting clenched for an attack!

Praying Mantis have long been a mysterious creature that lurk in woods, rain forests and even outdoor gardens which make perfect homes because of their rare physical appearance and hunting skills.  Many children dream of owning a mantis as a pet but truth be told-their survival rate in this condition is only about a year. Its best to leave this wondrous animal out in the wild where it can continue to stun, amaze and leave all those in awe of its tremendous presence.