If you read the articleabout how to pair a white wine with a vase of flowers but aren’t really into chardonnay, sauvignon blanc or Riesling than you’re going to like this piece that turns the tables to red.  You and I both know you’re a different species altogether from the white wine drinkers and deserve an opposite approach when selecting your florals.  As white wine drinkers are often more casual in personality as well as easy going and fun loving-the reds tend to fold more seriously towards the intense side where they know what they want, when they want it.  Judging from this broad categorization, you can imagine that the blooms chosen for you will look quite different.  If you’re a merlot, cabernet or pinot noir consumer, check out this list of flowers especially tailored for you! 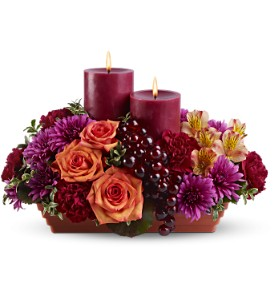 
Merlot is a smooth operator in the wine world and tends to be on the heavier side in terms of its composition.  The color is almost always deep crimson which helps to make a sexy setting.  Due to its low tannins, merlot is quite popular and is often described as either having a cherry, chocolate or herbal flavor.  There’s no if’s, and’s or but’s when talking about merlot so the perfect flower to accompany a glass should be just as dramatic in nature.  Try placing a few stems of brown cymbidiums, black calla lilies or chocolate cosmos in a vase to really set the scene.


Cabernets are a lot of fun to variate within your palette because the taste can be completely dependent on where the grape was grown.  Since they are harvested in a multitude of regions, you are bound to receive an eclectic flavor.  Having more tannins than merlot, this wine can taste dry to sweet, bitter to dry and has been described anywhere from having a pepper taste to sweet wood sensation.  That’s quite an array of flavor, isn’t it?  Since cabs can take on many different forms, that means that pairing flowers can also be a bit easier, giving you a tad more wiggle room for your shopping.  If you want to stick with the red theme of things, how about picking up a bunch of red roses, red dahlias or red James Story orchids to maximize this delicious display of eye candy?

This is a great wine to talk about because it’s really quite interesting…  Most popularly grown in Burgundy, France, this plant is actually a very fussy specimen to harvest.  Apparently, the stems and roots are very susceptible to the outer elements and prefers climates that are cooler with well-drained soil.  The shade of the wine is also interesting as well as opulent in color and resembles the jewel tone of a ruby.  Best matching florals are amaryllis, red poppies or red anthurium.