The History of the Cornucopia

The cornucopia has long been a significant symbol of the Thanksgiving Day holiday tradition.   Many of us recognize the decorative marker as a large basket that holds several different seasonal foods and flowers.  The most popular produce that New Englanders use to stuff the cornucopia are oranges, grapes, apples, bananas, gourds, small pumpkins, pears and artichokes while flowers usually consist of sunflowers, mums, hay, gerberas, calla lilies and mimosa.  Over hundreds of thousands of years, families select this centerpiece to be displayed during their celebratory feasts, enticing guests to pull out their preferred treats to enjoy during their visit.  Not only is this presentation both visually and tastily appealing, the cornucopia holds great historical importance when tracing back its origins.  Take a look where this customary relic came from and enjoy this tale, which will hopefully stimulate an interesting conversation between your guests. 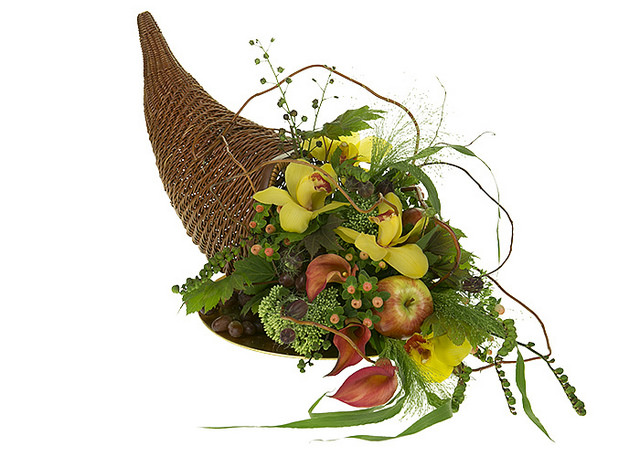 The cornucopia (or otherwise known as the “Horn of Plenty” ) has several different story variations explaining its beginning but because I love mythology, this is my favorite one I’ve found so far… 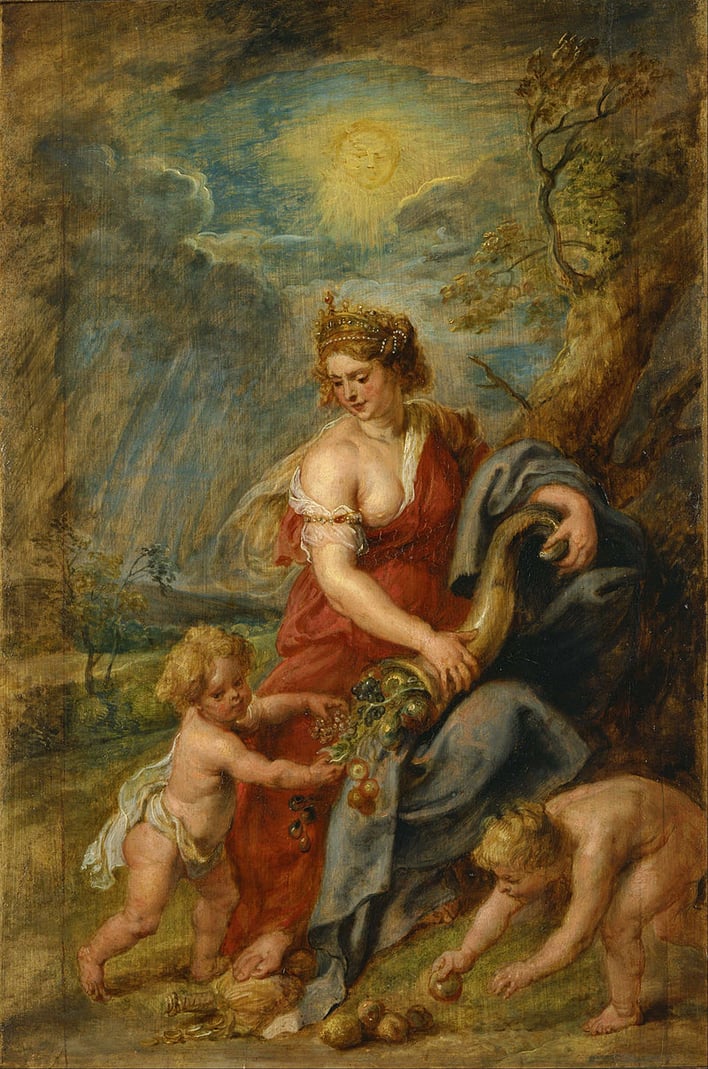 Allegorical depiction of the Roman goddess Abundantia with a cornucopia, by Rubens (ca. 1630)

Before Zeus was a mighty and powerful God, he was held in the woods to be protected from his father, Cronus.  His caregiver was a goat named Amalthea, who swore to keep the boy safe from any harm and raise him herself.  The goat nurtured him with milk, food and shelter until the day he was full grown and had received the strength to return to Crete.

One day, as the child was playing and laughing with his protector, Zeus accidentally handled Amalthea’s horn to roughly and broke it off leaving her with only one left.  Zeus felt so terrible about what he had done, he blessed the goat’s broken limb to always be filled with an abundance of whatever she might need for the rest of her life.

Today, we celebrate the cornucopia as the plentiful horn shaped basket that is consistently filled with nurturing and bountiful gifts.  For some Bostonians, the basket has been passed down as a family heirloom and for others, the centerpiece is ordered annually from local florists.  If you are looking for some ideas on how to fill your cornucopia this Thanksgiving, here are some of the top requested styles for November 2015.