What is the Meaning of the Cowslip Flower  - Primula Veris


Over hill, over dale,

Over park, over pale,

I do wander everywhere,

Swifter than the moonè’s sphere;

And I serve the fairy queen,

To dew her orbs upon the green:

The cowslips tall her pensioners be;

In their gold coats spots you see;

Those be rubies, fairy favours,

In those freckles live their savours:

I must go seek some dew-drops here,

And hang a pearl in every cowslip’s ear. 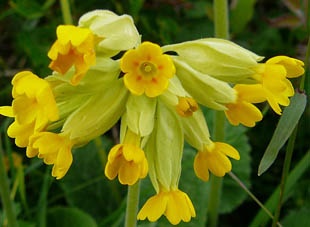 Cowslip is a welcomed flower for New Englander’s because once the winter snow melts, beautiful clumps of yellow patches emerge from the ground telling us that spring is close by.  The cowslip, or otherwise known as “Primula Veris”, is a traditional bloom that has been written about for centuries, including the infamous William Shakespeare as seen in his poem, “Fairy Land I”.  Although the origin of the flower is somewhat obscure, the pretty petals have certainly earned a rich history behind their importance and usage.


One of the most popular beliefs surrounding cowslip is its reference to Saint Peter, the gatekeeper of Heaven.  According to myth, one day he heard a rumor that people were entering heaven through a secret door instead of being accountable to the saint at the front entrance.  He became so angry that he dropped his keys, which fell to earth and instantly grew into a plant referred to as “Key Flower”.  The key-like shape of cowslip and its multiple blooms suggest that those who find it can use the keys to sneak into the backdoor to heaven.


Another equally interesting legend that pertains to cowslip is its association with fairies.  The flower is said to be extremely precious to fairies and is used to find their hidden treasures and gifts.  Along with the symbolism of “death”, “birth” and “doom”, the cowslip also means “adventure” and “mischief” which comes from this particular fable.


The beautiful blooms do have outside uses other than primarily decorative as well, since the heads are sought after to make cowslip wine and a children’s toy called “toasties”.