So this might sound a little strange but there’s a new trend sweeping across New England this Thanksgiving and it’s all about dressing the bird in flowers!  That’s right!  People are actually asking caterers and florists to create small flower displays either around or on top of their turkeys in order to reap a particular benefit!  Sound crazy?  Well, the reason lies in the belief that doing so will bring about some…umm- interesting side effects.  We’re not quite sure where this phenomenon started but we do know that Bostonians are actively placing their orders for the upcoming holiday sending designers into turkey hysteria!  Want to learn more about how and why this fad is circulating?  Read on to learn the secret to this turkey taboo… 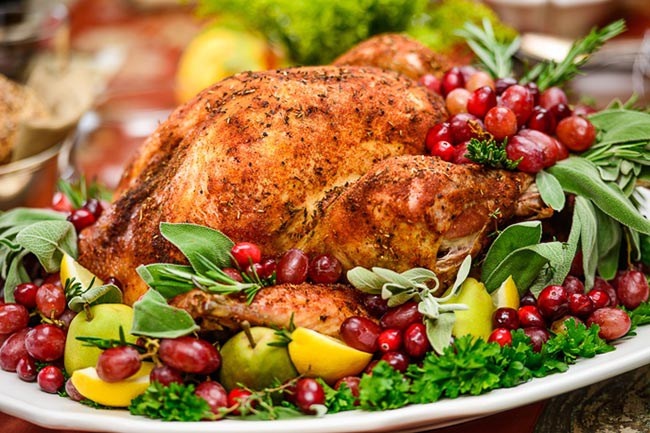 According to ancient scripture, the turkey was once thought to be of regal stature in certain cultures and was often given a bed of petals to sleep on during customary celebrations.  Depending on the color of the feathers the bird adorned, people would actually attempt to match the shading to the blossoms presented.  If the turkey had more red feathers, he was thought to be a bringer of love and romance while a turkey having blue feathers was believed to induce sorrow or death.  Nowadays, the Thanksgiving turkey is being wrapped in flowers of a chosen color in the hopes to encourage the desired omen.  (For those who would like to try this, select green flowers to entice a windfall of money, purple for courage and yellow for happiness.)


A second theory for why people are covering their birds with flowers is due to the aroma-therapeutic benefits that can be infused into the skin.  While many of these dressings include herbs such as rosemary, parsley and sage, there are blossoms such as dandelions and nasturtium now being thrown into the mix.  Creative chefs are infusing their meat with an incredible seasoning of sweet to spicy tastes just by covering the top of the turkey’s back and legs with freshly cut florets.  Be careful not to use species like roses that will embellish a musty aftertaste and try choosing varieties that have an earthy consistency such as heather, alliums, chicory, geraniums and borage.