What Can Red Sox Larry Lucchino Teach a Florist in Boston ?

Larry Lucchino Cares About Red Sox Fans One at a Time

a few months ago my 8 year old son came home and said I should be a Yankees fans. He is a huge fan of Fenway Park, but the Red Sox recent woes had made him look elsewhere. He argued that the Yankees had Babe Ruth, the greatest of all time.
Being a lifelong Red Sox fan, I was stumped. I wrote a letter to Sox chief Larry Lucchino asking for advice.
Here is the letter he wrote back. 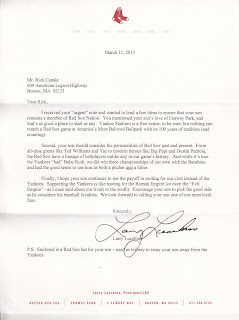 "Dear Rick,
I received your 'urgent' note and wanted to lend a few ideas to ensure that your son remains a member of Red Sox Nation. You mentioned that your son's love of Fenway Park, and that's a good place to start as any. Yankee Stadium is a fine venue, to be sure, but nothing can match a Red Sox game at America's Most Beloved Ballpark with its 100 years of tradition (and counting).
Second, your son should consider the personalities of Red Sox past and present. From all-time greats like Ted Williams and Yaz to modern heroes like Big Papi and Dustin Pedroia, the Red Sox have a lineage of ballplayers unlike any in our game's history. And while it's true the Yankees 'had' Babe Ruth, we did win three championships of our own with the Bambino and had the good sense to use him as both a pitcher and a  hitter.
Finally, I hope your son continues to see the payoff in rooting for our club instead of the Yankees. Supporting the Yankees is like rooting for the Roman Empire (or even the 'Evil Empire' - as I once said about our rivals to the south). Encourage your son to pick the good side as he considers his baseball loyalties. We look forward to calling your son one of our most loyal fans. "
Sincerely,
Larry Lucchino
P.S. Enclosed is a Red Sox hat for your son - used as bribery to sway your son away from the Yankees.
----
as a florist in Boston, who has done lots of business with the Red Sox, I have a new found respect for Larry Lucchino and see why those argue for his plaque in the Baseball Hall of Fame.