Red Sox Go On Winning Streak with Flowers in the Dugout 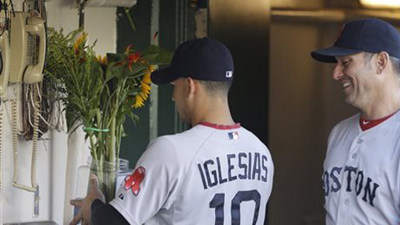 Who says flowers don't belong in baseball? Just ask Red Sox Jonny Gomes and Mike Napoli. They recently purchased flowers for their third base coach Brian Butterfield in Seattle. Since this purchase, the Red Sox have won four straight games and the flowers remained in the dugout for each game.

Infielder Jose Iglesias was given the charge of caring for the flowers and making sure they had safely made the trip from Seattle to Oakland.

On Friday, July 19th the Red Sox will host the Yankees at Fenway Park. I have already reached out to Napoli and Iglesias via twitter to offer Exotic Flowers in Boston delivery service to the dugout for the second half of the season.

Let's hope the flowers bring a stroke of World Series fortune to the Red Sox.