Double Deck Those Halls with Our Deck the Holly Bouquet 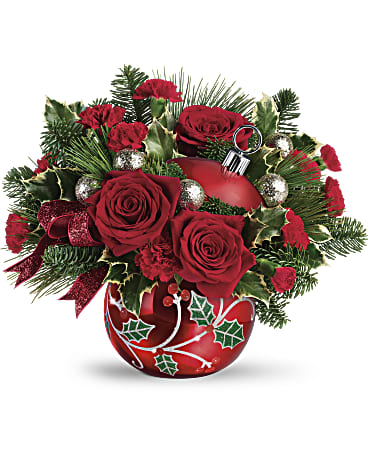 Hand-glazed with a shimmering finish and jolly holly details, this keepsake ornament jar is a festive vase for a lush Christmas bouquet, then becomes a beloved home for holiday treats!Teleflora's Deck the Holly Ornament

This ornament jar with lid, can be filled with holiday treats throughout the season and for years to come.

The Symbolism Behind the Holly Plant

Turns out the tree in your front yard has been

A holly tree all along, finally showing true colors

As a taxi driver leaves the driveway and

A neighbor in a red shirt crosses the concrete

Sidewalk. The succulents to my side reach like alien

Synapses, your white car looks at me cross- 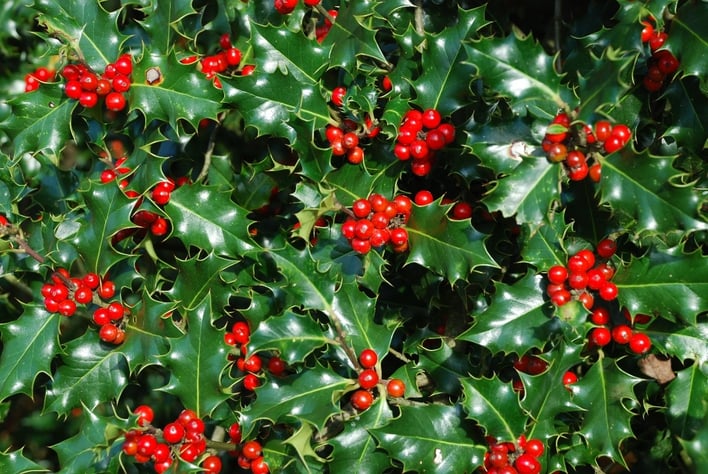 
The Holly Tree is one of the most popular symbols of the Yuletide spirit and is on the list of the top ten requested items for seasonal décor.  The primary reason behind this is the plants stunning appearance that exudes shockingly strong colors of green and red.  Its bright and shiny foliage is complimented beautifully by crimson red berries that dangle from the wood of the stem making this a Christmas lovers treasure when utilizing holly in centerpieces, wreaths and garland.  Often, you can find this variety planted as a bush outside residential homes where it remains true to its color year round (yes, even in New England).  Due to this desirable trait, many florists and decorators adore this hardy species because of other flowers difficulty surviving the harsher winter weather where they fall victim typically to ice and frost.  If it’s not used in landscaping, you’ll see cut branches often folded into festive arrangements, particularly when accompanied with red roses, pine and other traditional December greenery.  One thing that you want to keep in mind if you’re planning on bringing holly into your house are its prickly leaves that are sharp enough to cause wounding if one gets too close.  Perhaps this singular flaw is the reason behind its symbolic reference when not paired with the cheer and joy of Christmas.


Holly’s hard, pointed edges are historically referenced with the idea of “combativeness” and “pain”.  The beguiling attractiveness of the plant also explains the theme of “trickery” found in religious transcripts not unlike the forbidden fruit in Adam and Eve.  The appeal of the round jewel toned orbs and the glitz of the leaves exudes the well-known lesson, “Not everything that is beautiful is necessarily a good thing.”  “Aggression” and “defensiveness” are two more synonyms associated with holly, particularly in Roman times when the redness of the berries were a sign of war and bloodshed to come.  Several battles are on record to have occurred just because a soldier spotted the tree in full bloom, triggering him to be on guard no matter who was the next to approach him.  Like many other plants possessing the red appearance of a bloom or fruit, holly is also tied to the devil meaning that he is close by and watching you.