How Did My Flowers  Get to Boston ?

I’ve bet you’ve visited flower shops a million times before, carrying beautiful blossoms that strike you as soon as you walk through the front door.  Buckets of sunflowers, roses and hydrangeas are the most common varieties that are being carryied this month but did you ever wonder how they got there?  Often, we don’t take into account the logistics involved with flower transportation and don’t realize how this factor alters conditions including availability, longevity and even price influxes or reductions.  The process is quite fascinating when you really get down to it.  Understanding how it all works will not only help you to become a savvier shopper but it will also give you a greater appreciation for the stunning stems you bring home weekly to put on your tables.  So here’s how it works…

There are a few different approaches that florists use to select their flowers.  They can be local, meaning that they are grown in greenhouses and farms that are close in proximity to your area or they can be imported from far away, even from another country.  Let’s start with the “greener” method and begin in our own backyard…

There are many reasons why you should consider buying flowers that have been raised to supply your floral specialty shops.  For one thing, their travel time from being cut, boxed and shipped is going to be considerably shorter than imports sent from far off places like Japan, France or Canada (although wait-there’s bonuses to that too).  This can positively affect the flower’s lifespan to be longer and lower costs due to a decreased need of fuel for gas or air flight. It also allows you to know more about the product and be able to find out how the crop was harvested and what by what means with regards to chemical vs. organic support materials.  Buy shopping locally, you can also help sustain these growers within your community thus supporting a higher production of fresh flowers for your neighborhood.

Imported flowers are generally purchased from an auction or a large wholesaler that buys what the florists wants and then reships it to them after they have bought from a far away grower.  The first issue that needs considering is that they have a long way to go before they get here.  Airplanes are usually the first choice for shipping because they arrive relatively quickly and have a large storage area for cargo.  Problems associated with imported flowers usually pertain to delayed flights where the flowers are kept too long in heated facilities without water or my favorite-trouble with US customs when they arrive to the gates.  Any unordinary fibers or bugs will win that shipment a one-way ticket to the incinerator meaning they’ll never make it to the florist at their cost making things pricey.  Another problem is that buyers cannot see first hand what they are paying for since the order has to first survive its transportation route.  A spectacular sample of a dahlia looks great online but if it’s had a bumpy ride over, it can be quite disappointing to the end user.  So why do you ask, import flowers in the first place?  Countries such as Holland provide the world with an auction that showcases rare and unique product from around the world.  Things can get pretty dull when you’re using the same varieties of plants and flowers so including a broad range of choice helps designers create fresh and fun looks that keep their customers satisfied.  Being able to access a broader spectrum of color and texture is what keeps the industry learning constantly and adapting to contemporary themes and styles.  The third important reason for importing is that although New England grow beautiful product of our own, there are some things that we simply don’t have the conditions for.   This is when a secondary source becomes extremely useful particularly within wedding events.  Connecting with a large variety of suppliers both educates and influences Boston florists to provide the best arrangements for their customers so a healthy combination of the two is a Boston florist’s best bet!

Glow in the Dark Roses in time for #StarWars Day 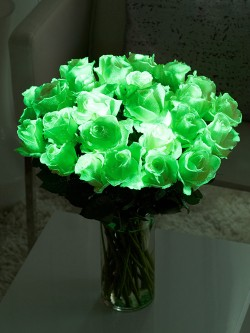 Pricing varies on the roses anywhere from $10-$20 per stem. Supply is short. Exotic Flowers also carries and sells blue roses regularly. At Exotic Flowers in Boston, thousands of roses are readily available. Multi color, tie dye and rainbow roses are also available by ordering in advance.

Exotic Flowers remains at 609 American Legion Highway in Roslindale for more than seventy five years. Exotic Flowers is a family owned and operated business now in its third generation. An owner is always on site. A person always sees every order.

Stop by our Roslindale location on Tuesday May 4th, 2015 and receive a free Star Wars gift from 730am-5pm. May the Force be with you.

Glow in the Dark Roses at Boston Flower Shop

Pricing varies on the roses anywhere from $10-$20 per stem. Supply is short. Exotic Flowers also carries and sells blue roses regularly. At Exotic Flowers in Boston, thousands of roses are readily available. Multi color, tie dye and rainbow roses are also available by ordering in advance.

Exotic Flowers remains at 609 American Legion Highway in Roslindale for more than seventy five years. Exotic Flowers is a family owned and operated business now in its third generation. An owner is always on site. A person always sees every order.