Hanukkah Flowers - What is Hot ? 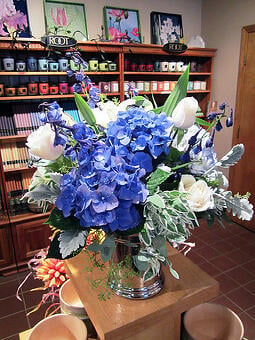 Hanukkah is a special time to celebrate with friends and family where the festivities include beautiful candles, delicious foods and elaborate decorations, particularly floral centerpieces.  Traditionally, the colors used within the arrangements made for The Holiday of Lights are blue and white but that doesn’t mean that we can’t step out of our comfort zone and try new palettes of design!  Hanukkah demonstrates an explosion of color throughout the flickering of menorah light and scrumptious homemade cuisine so why not incorporate these two concepts together?  Now, you’re probably thinking that contemporary vase work ideas will be too ostentatious, perhaps composed of chartreuse and hot pink, a combination maybe be unsuitable for your holiday table but I assure you there is another way…

How about we mix and match using some of the more recognized colors with a new flash of color!  Although there are millions of combinations, these are my favorites for Hanukkah celebrations! 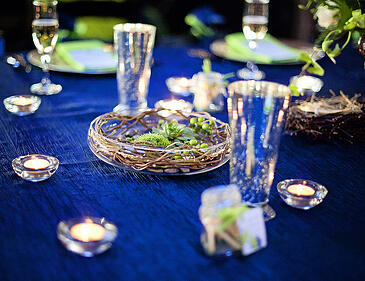 Blush, cream and white are extraordinary together because they compliment one another to blend a stunning and elegant floral presentation.  Beautiful as a larger center centerpiece or utilized within small accented bud vases, these tones create the ideal dining décor by promoting a stately but relaxing visual appeal.  White flowers are numerous in many species but hydrangea, lisianthus and roses are excellent choices.  Hydrangea also works well within the cream category as well as roses and lisianthus.  For your blush, spray or garden roses are very sweet or you can pick gerberas as the pink accent, which can be bought in many varying shades.  If you still think your vase needs a little added color, carefully tuck a conservative amount of greenery sporadically throughout the arrangement.  My go to greens are usually October weed, lady’s mantle or lambs ear. 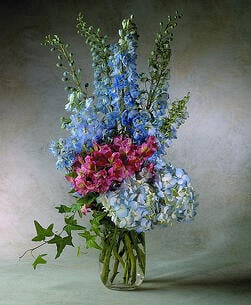 You’d be surprised but blue can be easily intertwined with yellow so keep this in mind as a possible option for your Hanukkah florals.  The bold colors are sensational and reflect the theme of light, joy and happiness quite well.  If the pairing is too bright for your taste, try mixing in a few stems of white or cream to soften the look.  September weed, freesia or lace flower are great choices because of their breezy and flexible appearance.  Stay away from larger headed blooms such as white pom poms, tulips or lilies because they will clump up the piece and deter from the grandeur style that we’re shooting for.   For your blues, try stocks of delphinium, mountain thistle, statice or hydrangea.   Possible yellows could include roses, freesia, sunflowers, lilies or even football mums but this shade is also available in a massive selection so select something that really reflects what you love!

all photos in this blog post can be attributed to Flower Factor and Aboutflowers.com

Suzie grew up in Andover, MA and is a graduate of Salem State College. 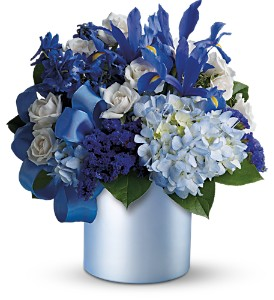 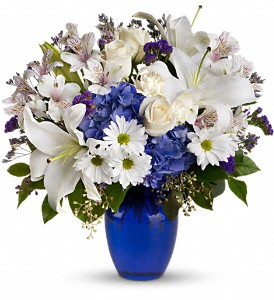 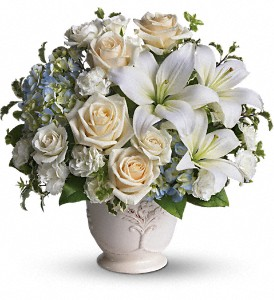 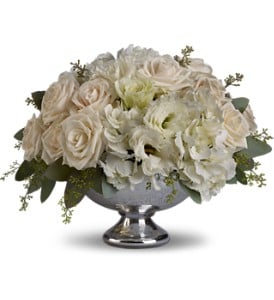 Hanukkah, also known as the Festival of Lights, celebrates the victory of the Jews over Greek persecution. When the Maccabees, the leaders of the war against the Syrians, reclaimed the Temple, they only had one flask of oil to light their candle lit Menorah. Miraculously the Menorah stayed lit for eight days - thus the eight days of Hanukkah, which begin on the 25th day of the Hebrew month of Kislev. In 2010, Hanukkah begins on December 1st.

In partnership with the Society of American Florists and www.aboutflowers.com - Exotic Flowers in Boston is honored to present some flower decorating ideas for Hanukkah. 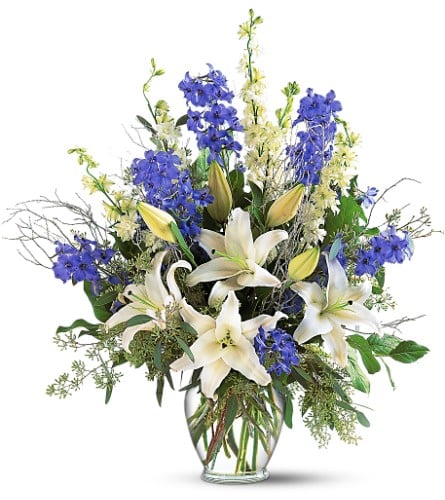 Ask the staff at Exotic Flowers to design a festive arrangement featuring flowers in the traditional Hanukkah blue and white or in all white - perfect for a centerpiece or to greet guests on a table in the foyer.

Use fresh evergreens to decorate around the menorah. Place colorful dreidels and chocolate coins around the table for kids to enjoy.

If you are having an open house is and many persons will be in a room, it is important to give special attention to the larger display areas such as the front door, foyer, mantle, buffet or serving areas, powder rooms, windows and staircase. This decorating tactic will help you get maximum impact because with many people in a room smaller arrangements placed around will not be seen at all times. By focusing on a few focal areas in each room, more space is made for glasses, cups and food plates and there is less chance of an accident.

As guests leave, have a vase of loose flowers by the door and invite them to take one home as a gift.

For an elegant celebration, take advantage of all places where candles could be displayed:

Line a walkway with votive candles in luminaries leading up to a door.

Place garland on the mantle with fresh flowers and candles to beautifully grace your room and make the most of light by enhancing the fire.

Float candles and flowers in treasured crystal or silver bowls to create a fabulous effect.

Place scented candles with fresh blossoms in each powder room.