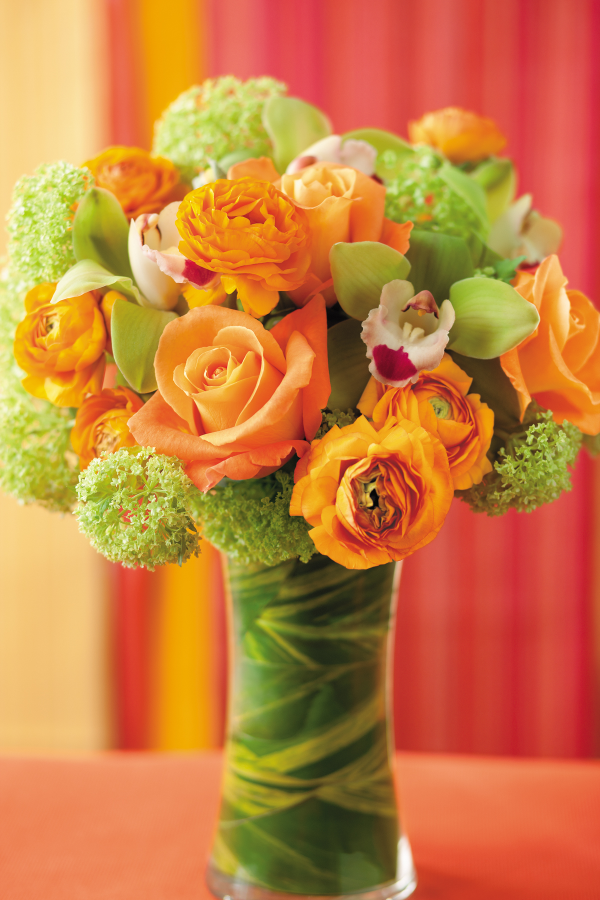 August is Happiness Happens Month Worldwide. Not that we need a month to tell us the benefits of being happy, but take a look at this press release and see how science tells us how flowers make us happier and healthier.


New University Research Proves It Can Be Better to Give Than to Receive
Gifts Say More About Us Than We Know
(Boston, MA) – Happy birthday, congratulations, thank you, I love you, thinking of you. Each day, thousands of gifts are exchanged by people in Boston who want to send thoughtful regards to deserving friends and loved ones. According to research from Rutgers University, the presents we pick to convey our special messages say a lot about us.

Rutgers University researcher Jeannette Haviland-Jones, Ph.D., director of the university’s Human Emotions Lab, explored what the gifts we choose say about who we are and whether they affect how we are perceived. The research reveals that those who send flowers, in comparison to other gifts, are viewed as successful, caring and emotionally intelligent people. More specific findings include:


“Our findings show that you can influence and change what people think of you in a significant way through the gifts you give,” says Haviland-Jones. “That news is particularly important to those interested in enhancing friendships and romances, even business relationships.” Whether in Boston or Belgium, flowers prove to make happiness happen.

Discovering the scientific power of flowers is not new to Haviland-Jones. Previous Rutgers University research conducted by her team found that flowers create instant delight and happiness, and increase enjoyment and life satisfaction. Specifically, upon receiving a gift of flowers, the female study participants responded with true smiles and reported positive moods that lasted for days. The presence of flowers also led to increased contact with family and
friends.

“Flowers have evolved to activate positive emotional responses from people,” says Haviland-Jones. “Each bloom has the potential to put a smile on our face and sway our opinion of a friend, colleague or loved one. That’s powerful.”

M.J. Ryan, award-winning author of the Random Acts of Kindness book series and The Giving Heart, uses cutting-edge science to bring out the best in people. In her books, she teaches individuals how gratitude and generosity can result in greater happiness, health and feelings of human connectivity.

“Gift recipients experience compelling connections with givers, and the positive link is particularly evident in the exchange of flowers,” says Ryan. “In my everyday work with individuals, CEOs and leadership teams at some of the world’s top global companies, I see the powerful implications of gratitude and appreciation.”

According to Ryan, a simple call to your local florist can make a big impact beyond conventional gifting occasions. Some of her favorite, unexpected gifting opportunities include surprise recognition for a job well done; an “I miss you” gift for an out-of-town family member; and an advance “thanks for hosting us” gesture before visiting a friend’s house. Ideal for all your Cape Cod and South Shore visits.

“A successful person is not necessarily someone with a lot of money and material goods, but rather someone who is in tune with people and knows how to touch their hearts,” says Ryan. “I can think of no other item besides flowers that evokes such positive feelings and perceptions for both the giver and the recipient.”

Ryan has coupled her expertise on the power of gratitude with her love of flowers to create Random Acts of Flowers, a list of her favorite reasons to send a floral gift.

“I see flowers as a way to capture special moments and emotions in life,” says Ryan. “People truly and fondly remember when they get flowers, and you will continue to feel thanked throughout your relationship long after you send them.”


“Flowers are the perfect expression of gratitude and appreciation, and they deliver a message with sincerity and care,” says Ryan. “The new research shows that these positive characteristics also are attributed to the giver. Giving flowers is an act of kindness, and the results are anything but random.”

Research Methodology
Jeannette Haviland-Jones, Ph.D., of Rutgers University, and her research team investigated the personal and perceived impact of gift-giving. The study recruited 150 ethnically diverse female study participants, who had a median age of 47. Participants studied 12 personal profiles (six men and six women), including contributions to work, charity and family, with the sole variable being the types of gifts they give – flowers, gourmet food or luxury items such as jewelry. Each profile was evaluated on positive and negative emotion, aesthetic appreciation, emotional intelligence and achievement.

About M.J. Ryan
Inspirational author and coach M.J. Ryan co-created the best-selling Random Acts of Kindness book series, The Happiness Makeover, This Year I Will… and several other books on giving and gratitude. An expert in human fulfillment and giving, she makes speeches and holds workshops throughout the country on positive emotions and enhancing quality of life. Ryan’s advice has appeared in more than 1,000 newspapers and magazines including USA Today, The Wall Street Journal, Family Circle and Cosmopolitan. Her television appearances include The Today Show and CNN
0 Comments Click here to read/write comments 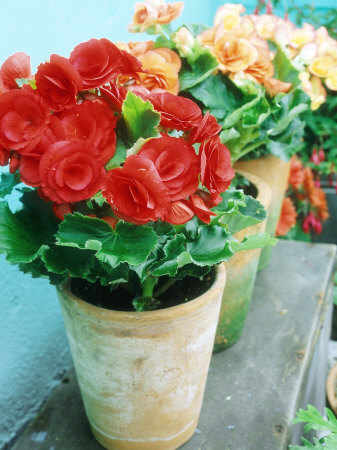 For example, when a client in Boston sends flowers to Princeton, New Jersey; the client can breathe easy. Exotic Flowers has a great relationship with Monday Morning Flowers and the owners Kevin and Georgianne Vinicombe will treat Exotic Flowers' clients the same way they treat their own. These florist to florist relationships are the primary reason our clients choose worldwide delivery over companies like 1-800-Flowers and Justflowers. 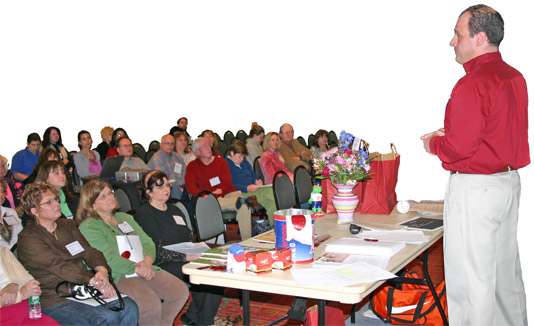 Open Letter to our Floral Colleagues - by Rick Canale

2010 has been a year of many honors and accomplishments at Exotic Flowers. Sonny Canale celebrated his 52nd year at the helm of Exotic Flowers and Lombardi Florist. We delivered over 10,000 gifts to our clients and provided jobs for more than twenty local residents.

2010 was also a year of personal accomplishment for me as well. I was invited to judge the Floral Management Marketer of the Year competition and the Outstanding Varieties Competition at the Society of American Florists (SAF) Convention. I was also asked to participate in a panel on social media at the SAF convention as well. These invitations are considered some of the highest honors in the floral industry. My exposure and contributions in these fields have also led to more invitations.

My colleagues had recently asked me to help lead the newly formed Massachusetts Professional Florists Association; to serve as a member of the SAF members committee and to serve again on a social media panel at the SAF Growth Solutions Conference in 2011.

Below is my letter of response to these invites.

" I have thought long and hard about your proposal. I am honored, flattered and grateful.
Your invitation has paid me the highest honor - the respect of my
peers... and more importantly those who I aspire to. Having grown up in the flower business, I have always known how hard it is to make a career of this business. I do my best to give back to an industry that has given me and my family so much.
Of course, everything comes back to family. At this time, I must
respectfully decline your invitation. I do not feel I can give the
commitment SAF deserves. Please know, I do not feel this is a
permanent answer. I will continue to do everything I can for the
growth of our business as a whole.

Why was Exotic Flowers the only Massachusetts Florist at the SAF Convention?

by Rick Canale of Exotic Flowers in Boston

I just got back from the SAF Orlando floral convention in Florida. The convention celebrated its 126th anniversary this year. 289 people from 35 states and four countries attended the event. Fifteen percent of the registrants attended for the first time.

The numbers from the show exhibit a small sliver of the floral industry.

The highlight of my trip however was three-fold.

One - the people. Floral industry members are some of the hardest working and kindest people there are. I was able to have coffee with industry leader Mark Nance AAF of Bloomnet. I chatted with Floral Management 'capo' Amanda Long. And it was great getting pats on the back by industry icons Stan Pohmer and Teleflora Chairman Tom Butler AAF, PFCI. 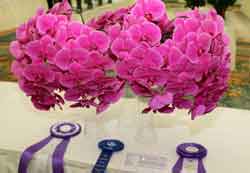 Left: This year's winner is magical.

I was honored and thrilled to participate in an engaging panel with two marketing muses. Our job was to present "Finding the Right Social Networking Strategy for Your Business,". Along with Georgianne Vinicombe of Monday Morning Flower and Balloon Company and Mandy Majerick, AIFD, PFCI of HotHouseDesign Studio.  What an engaging response from the attendees ! It was great. Renato Sogueco, CIO at SAF put together a great panel and executed the session flawlessly.

It was a joy to see industry heavies, Brian Wheat of Lafayette Florist, Paul Bachman of Bachman's of Minnesota, Paul Brockaway of Conklyn's of Virginia, Don Coleman of Mayfield Florist and Kathy Dudley of The Bloomery in Butler PA all in the audience.

Just seeing a full audience engaged in our session was worth the time trip alone.

My only disappointment at the convention - why was I the only florist, grower or wholesaler there from Massachusetts? Massachusetts is one of the largest consumption states of fresh flowers in the United States. We even boast the most recent Florist of the Year. Yet me, Rick Canale of Exotic Flowers in Boston was the only Massachusetts representation. Too bad for Massachusetts and too bad for Boston florists. 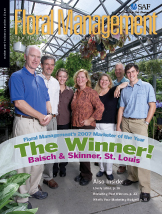 Rick Canale, the Managing Director of Exotic Flowers, Boston's Premier Florist and www.exoticflowers.com has been chosen by the editorial staff at Floral Management Magazine to serve as a judge for the 16th Annual Marketer of the Year Contest.

A $5,000 cash prize, sponsored by Design Master color tool, Inc., as well the the opportunity to be on the cover of the October 2010 issue of Floral Management.

What Makes a Winner?
Judges look for unique, innovative and successful marketing efforts. It can be a single campaign, or a series of promotional and advertising efforts over the course of a year or more.

Rick Canale won the contest in 2008 and has been asked to return as a judge for this years contest. Rick is one of seven judges from the floral and media industry.

"I am proud to serve the industry and my peers. This year's contestants inspired me in my own flower shop. The contest is a great opportunity for the floral industry to implement some marketing savvy in their own operations. I cannot wait to see the results at the SAF Convention in Orlando. " - Rick Canale