If you’re into flowers and eating from farm to table, it might be a good idea to look into this interesting new event that allows you to dine in divine surroundings within blissful content.  This “green” way of eating amongst friends and family is making a serious impact on both the floral and restaurant world and it’s all due to the forum’s wild success found in the earliest stages.  With the intent to bring organic blooms and whole foods together, naturalists are calling this fabulous, contemporary feasting option the way to go in the next century.  Toxins, chemicals and other contaminants have been on the news for years as likely pollutants in our soils, which is why this idea shows serious merit and might just pave the way for all future social cuisine gatherings. 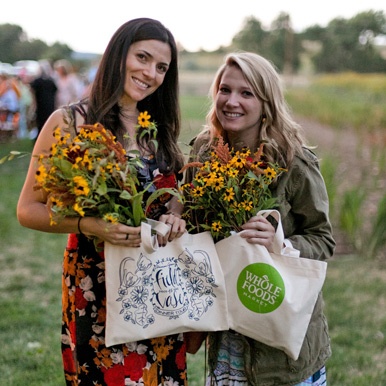 Why does this work so well?


One of the reasons is because of the expertise gifted by talented florists who couple texture, color and architecture of flowers to match the servings hosted on the plates.  By pairing a romantic contrast between blooms and menu offerings, guests not only receive a tasty dish of fresh and wholesome food but also get to experience the visual appeal of stunning arrangements.  Depending on where the event is being hosted, people will sit amongst a table of twenty to thirty people inside greenhouses or outside on patios in the area where their servings originate.  For those who enjoy local wine and beer, refreshments are also served in the same style to encourage sales of homegrown beverages as well. 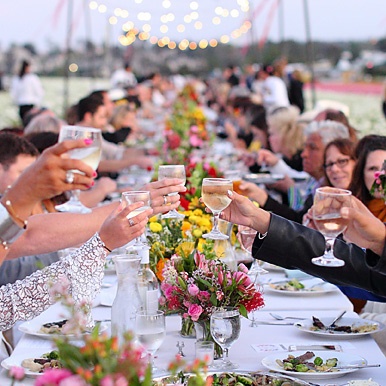 What started this event?


Since a vast majority of flowers and food are now being shipped into the United States from outside countries, “Field to Vase Dinners” are working to re-focus demand on local farms and eateries such as those within Oregon, California and Texas.  By hosting these dinners in places where we cultivate our own goods, the hope is to re-infuse interest in eating and growing locally owned products.  Another important reason behind this movement is to encourage the health aspects of eating fresh foods.  Cooked by some of the best chefs in the country, guests have a chance to taste for themselves the deliciousness of eating meals harvested from straight out of the ground while gazing upon domestically cultivated blooms.  Not only does “American Grown Field to Vase Dinner Tour’s” make sure everyone’s bellies are full by the end of the event, gifts of flower bouquets are also presented at the end of the meal to make the experience even more special.

Football fans are getting ready for their favorite day of the year next Sunday, the ultimate showdown between the New England Patriots and the Atlanta Falcons!  Hosted in Houston, Texas within NRG Stadium, people are on the edge of their seats to find out who will win the 51st annual sporting event that is sure to cause quite a commotion since Tom Brady has yet to be defeated by the southern team.  Another reason to stay glued to the TV is to watch how the quarterback yields his revenge after being suspended for the first four games of the season.  Experts are predicting a spitfire competition to see who will be the recipient of the Lombardi Trophy so be sure to plan ahead with food, décor and of course, flowers!


If you’re hosting this year’s Super Bowl and are thinking beyond making a vat of chicken wings and nachos for your guests to enjoy, you might want to think about a little décor to go along with the menu.   Team banners, t-shirts and color- coordinated settings are always fun but perhaps a few flower arrangements could be just what you need to spruce up your evening?  Here are a couple of samples for both Patriots and Falcon fans to select from and if you know you’ll have friends and family over who are routing for different teams, try a combination of the two to set an exciting Super Bowl mood! 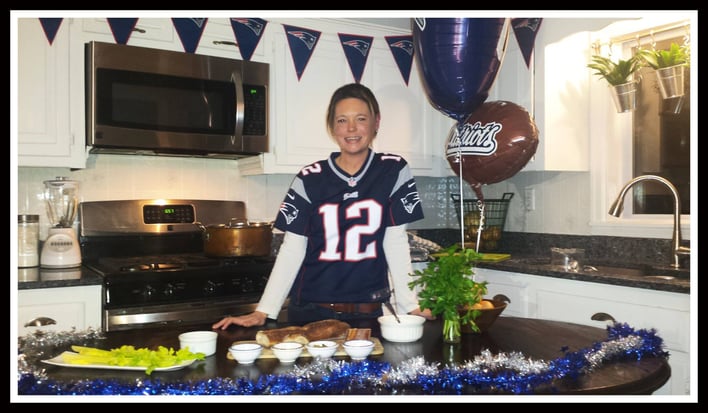 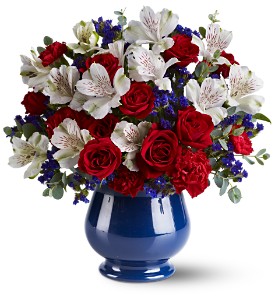 When coming up with design for floral pieces based on the Patriots, keep in mind that that there are three colors to play with: red, white and blue.  This gives you options of either combining the three or placing single colors in vases throughout the area you are entertaining.  Red roses, white hydrangea and blue delphinium are excellent varieties that will work well, either separate or together.  Other substitutes can also include red gerbera daisies, white phlox or blue dyed pom-poms.

The Atlanta Falcons also have a similar color scheme going which will work really well if you’re planning to create both for your party.  Featuring again red and white hues, you can easily implement white daisies and red carnations for centerpieces for a festive yet inexpensive presentation.  This team jersey also has black woven into the fabric, which can be interesting if you can find black millet, black roses or black calla lilies to incorporate within the bouquets. 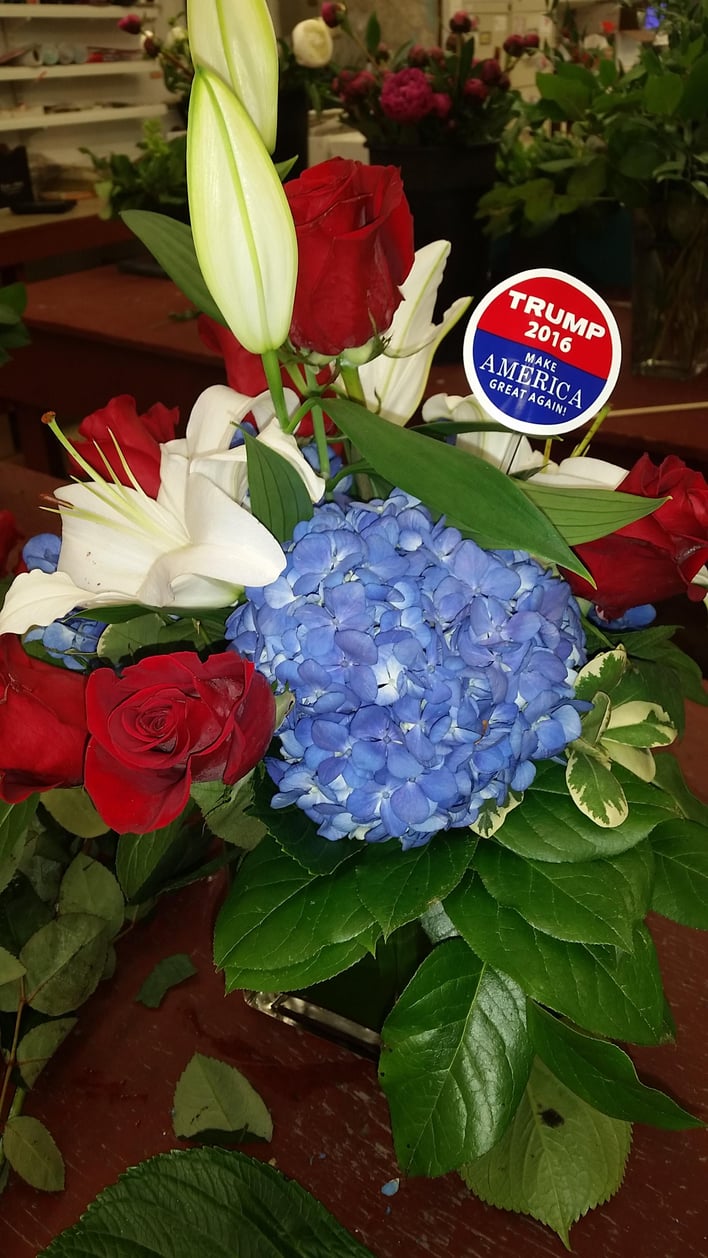 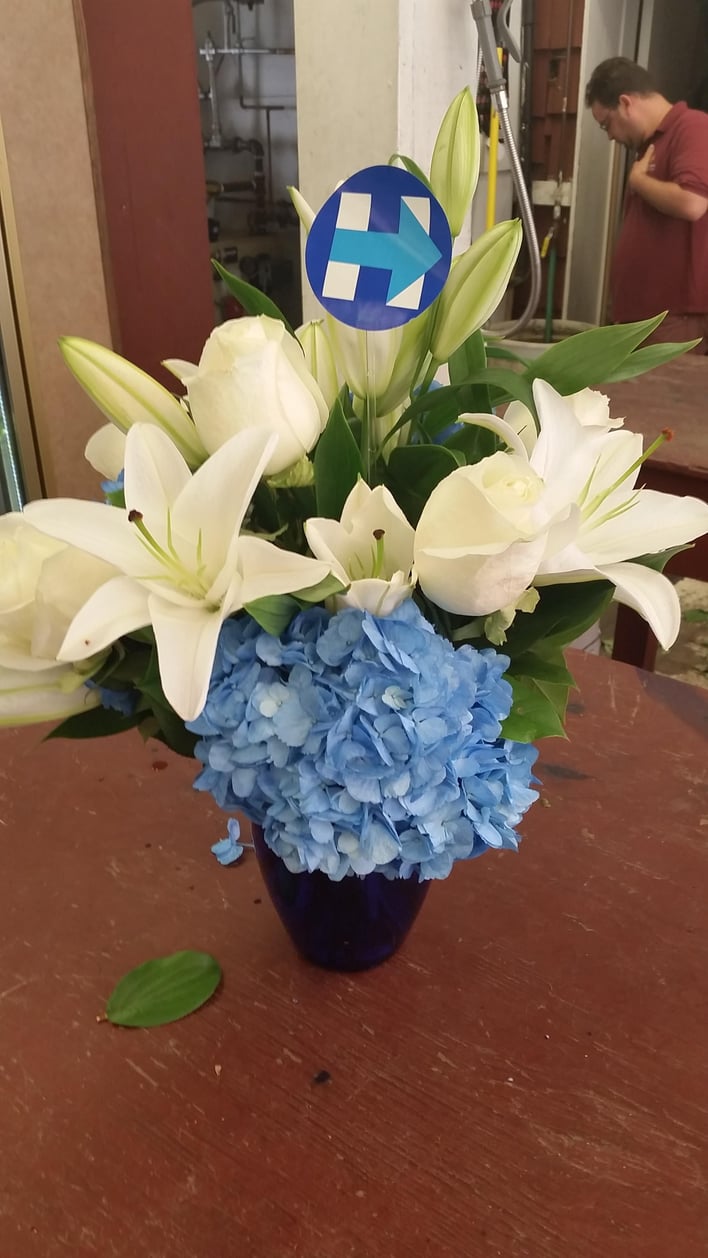 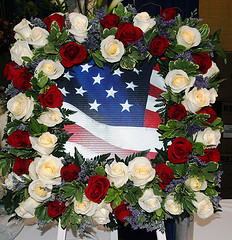 Memorial Day is a time to honor those who have lost their lives while fighting for our country.  It seeks to reiterate the importance of respecting these soldiers who left their families behind to travel to foreign places in search of defending all American life and both secure and preserve the gift of freedom and independence.  For many Bostonians, May 25th will be spent visiting the gravesites of loved ones and remembering the tremendous courage they possessed during their service.  Customarily, Memorial Day is a holiday where we gift those who passed with a bouquet of flowers, plants or flags placed on their tombstones.  While some are patriotically representative of a red, white and blue color palette, there has recently been a movement to change this traditional style.  I appreciate this combination but I can’t help but wonder what other designs might be possible for thanking our beloved troops?  What if there’s a way to perk up the Memorial Day sentiment with a twist of color and dynamic texture?  These are some of the new looks that are starting to pop up in floral shops across the city.

A spectrum of green has embellished several of the more popular Memorial Day arrangements, particularly for those who were members of the US Army.  While still holding onto the basic red, white and blue sheen, designers are finding that a few stems of lady’s mantle, octoberweed, and green berries help to materialize another level of depth within typically styled pieces.  This added shade not only blends the other three colors for a greater eye appeal but will also display a larger presence while incorporating a special sentimental theme.

Since Memorial Day pieces are usually shades of the American flag, why not separate the pieces into beautiful bouquets of single color?  Have your florists make three separate arrangements of red roses, white hydrangea and blue delphinium to create a sophisticated presentation.  You can also request several smaller nosegays and allow each family member to place one each at the gravesite. 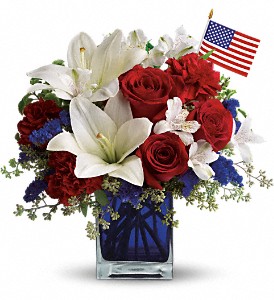 Although there is a wide range of colors that can represent the topic of “honor”, there is considerable evidence that blue is the strongest tint to reflect this emotion.  Several people believe that while blue is certainly a beautiful color, there aren’t enough floral varieties to choose from.  The truth is, agriculturalists are breeding more and more hybrids because of the growing demand.  Delphinium is definitely one of the easiest to come by but asking for scabiosa, jasmine and bachelor buttons.  For those looking for a plant, several florists now carry philanopsis plants that have conveniently been dyed blue as well. 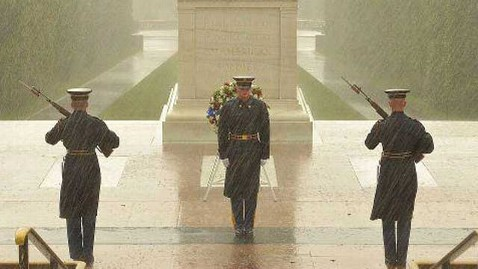 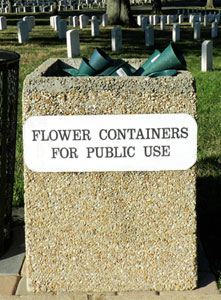 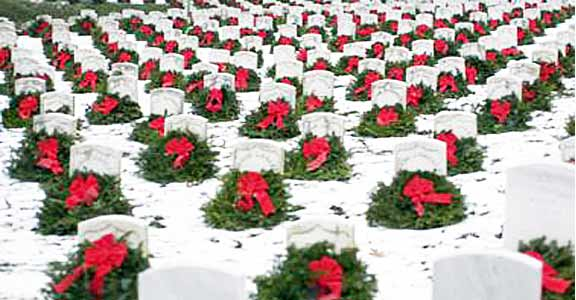 Celebrate Our Independence via Exotic Flowers in Boston

IN CONGRESS, July 4, 1776.
The unanimous Declaration of the thirteen united States of America,
When in the Course of human events, it becomes necessary for one people to dissolve the political bands which have connected them with another, and to assume among the powers of the earth, the separate and equal station to which the Laws of Nature and of Nature's God entitle them, a decent respect to the opinions of mankind requires that they should declare the causes which impel them to the separation.
We hold these truths to be self-evident, that all men are created equal, that they are endowed by their Creator with certain unalienable Rights, that among these are Life, Liberty and the pursuit of Happiness.--That to secure these rights, Governments are instituted among Men, deriving their just powers from the consent of the governed, --That whenever any Form of Government becomes destructive of these ends, it is the Right of the People to alter or to abolish it, and to institute new Government, laying its foundation on such principles and organizing its powers in such form, as to them shall seem most likely to effect their Safety and Happiness.
***** Read the rest on line or in any library. It matters. 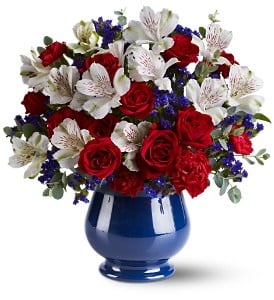 Exotic Flowers has deep military roots. Sonny Canale served on board the USS Buck DD-761 during the Korean War. We are neighbors of the Cardillo Army Base on American Legion Highway in Roslindale. We have worked closely with Fisher House Boston in West Roxbury.
Not a day goes by where the staff at Exotic Flowers does not recognize the importance of our heritage and independence. We are Americans and proud of it.

As Boston's Premier Florist, we have a responsibility to the community and our colleagues to set a good example. Our floral designers, drivers, maintenance and sales staff realize our importance to the entire Boston community. We offer a magnificent floral display which beautifies Boston every day. Our flower deliveries enlighten the lives of residents of Mattapan, Dorchester, Roxbury and Hyde Park daily.
We practice old fashioned American values; hard work, sweat and gratitude. We are thankful for our staff, our clients and we are thankful to be free.